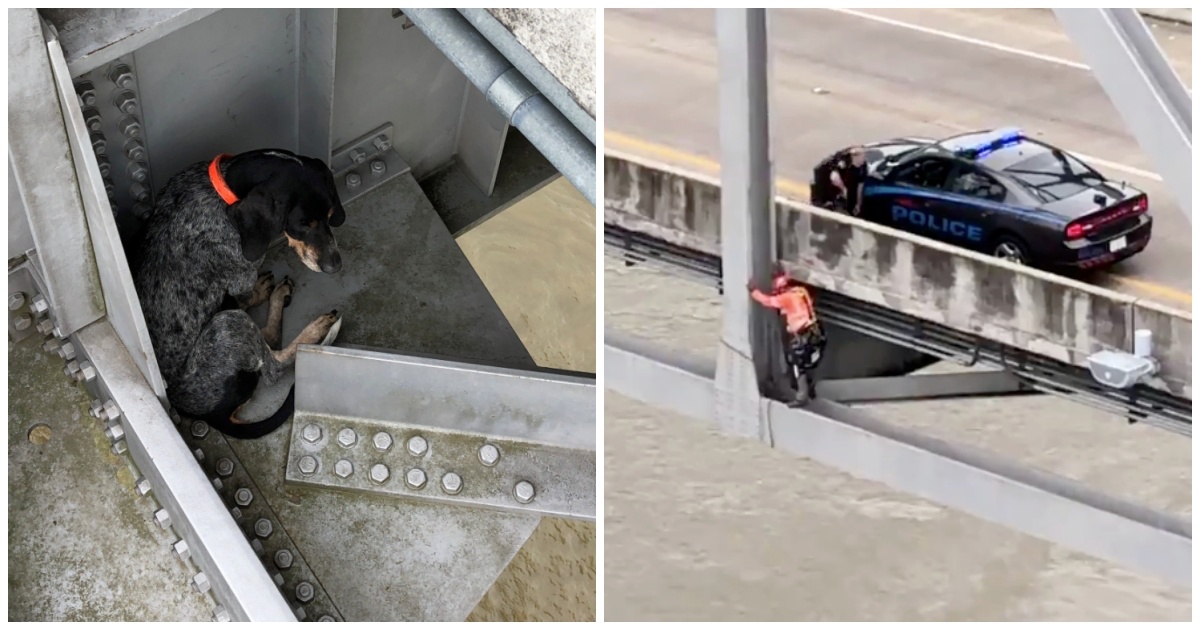 Craig Jenkins was out working above the Mississippi River with a bridge inspection team when he noticed something unusual.

Craig Jenkins was out working above the Mississippi River with a bridge inspection team when he noticed something unusual. He called over to his crew who could not believe their ears. Jenkins told his team he saw a dog 120 feet above the tumultuous waters below. At first, they thought it was a raccoon, but on closer inspection, the animal turned out to be a beautiful scared dog.

Somehow the dog, who appeared to be a hound dog of sorts, wound up getting stuck on a lower chord of the bridge. She was shy, but once she realized the work crew was there to help, she warmed up to them. Ryan Nataluk is the vice president and lead engineer of the company that was inspecting the bridge. He is a mountain climber in his spare time, so he never hesitated to save the dog.

Talk about being in the right place at the right time! Our bridge inspection crew was working over the Mississippi River this weekend when bridge inspector Craig Jenkins noticed a stranded dog beneath the bridge deck, 120ft above the river,” @Stantec tweeted about the event.

Nataluk’s crew members teased him about adopting the dog he rescued, but someone else wanted her. The Natchez Police Department report the pup was adopted not long after the intense rescue.

“She is a very fortunate dog,” stated Police Chief Walter Armstrong. “They need to name her, ‘Lucky.’”

We wish her all the best in her future. Press play on the video below to see Nataluk save the dog from falling off the bridge.