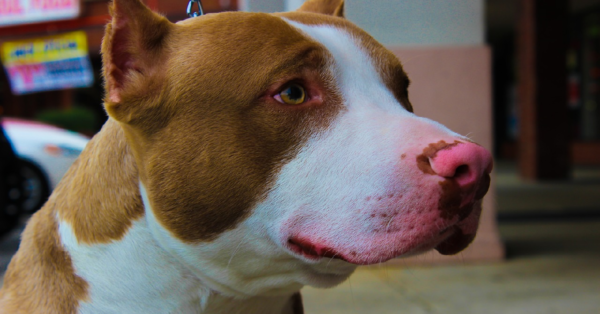 The only way in or out of the abandoned school was through a broken window – 15 feet off the ground.

There was a stray pit bull who’d been abandoned and found himself living inside an abandoned school. Luckily for the stray dog, help was about to arrive after a Good Samaritan noticed his howls coming from the abandoned building and chose to get in touch with the Stray Rescue of St. Louis.

The rescue organization was quick on the case, knowing that they needed to help the stray dog. Rescuers Donna, Natalie, and Scott from Stray Rescue were the ones to show up to the site, ready to rescue the dog in need.

It didn’t take them long to figure out they were being watched, as they quickly noticed the brown and white pit bull who was staring at them from the other side of a broken window at the school.

The group assessed the situation, trying to find a way into the boarded-up school. It soon became apparent that the only way in was through one of the many brown windows, a feat that was easily 15 feet off the ground. But they weren’t about to give up on the trapped dog. They got a ladder and ended up crawling through one of the windows and then went in search of the dog.

As Stray Rescue shared on YouTube, “An eery feeling crept over us when we entered the abandoned school. Class notes, assignments and even messages like ‘Have a great summer!’ still occupied the untouched white boards from the last day of class long ago. Students, teachers and families left on that final day of school, not knowing that they would never return.”

They further described, “Whistling and peering in each classroom, we eagerly searched for a lonely little dog who had been crying for help for at least three days. We found a lot of feces, leading us to believe he’d been in there a lot longer than three days.”

Eventually, when they were going up the staircase, they noticed the dog timidly peering around the corner at them when he heard them coming. Despite being a little hesitant at first, he looked genuinely happy to see them. He was quite thin and starved, but regardless of his situation, his tail was still wagging. he allowed the rescue team to get a leash on him and lead him to safety.

The rescue wrote, “After being through unimaginable circumstances that landed him a solitary existence in an abandoned school, we weren’t anticipating this pup to be such a polite little gentleman. He was so brave and trusted us with his soul.”

From there, it was only going to get better for him as the Stray Rescue group got the sweet boy to safety, giving him a second chance at a happy life.

Check out the daring rescue below: