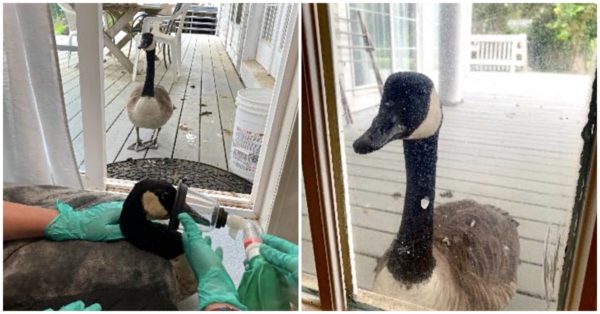 Before Arnold’s surgery, staff heard a tapping at the clinic door. His mate, Amelia, somehow located him and was hoping to see him. She stayed at the doorway during his whole surgery & recovery, never leaving his sight!

Arnold the Canada goose is well-known around the New England Wildlife Centers in Massachusetts. He lives on a pond near their facility and has been with his mate for years.

When staff noticed Arnold was limping and falling over, they brought him in for an exam and learned that he had two open fractures on his foot. While they don’t know for sure how this happened, they believe a Snapping turtle or other predator attacked him while he was swimming.

They knew if they wanted to save his foot, they would have to perform surgery and a partial amputation. They put Arnold on pain medications and antibiotics and prepped him for surgery, but they never expected what happened next.

Before his surgery, staff heard a tapping at the clinic door. When they went to look at what it was, they were pleasantly surprised to find Arnold’s mate trying to get into the clinic. Unbeknownst to them, the mate somehow located Arnold and was demanding to see him. She stayed at the doorway during the whole surgery, never leaving Arnold’s sight!

Thankfully, Arnold’s surgery was a success and his foot will heal in time. Once he woke up from anesthesia, they brought Arnold to the door so he could see his mate, whom staff named Amelia. They opened the door, and Amelia began grooming him. A calming presence came over both of them once they were reunited.

Arnold had to remain under their care while his foot healed so they could continue to change his bandages and keep a close eye on him. Amelia continued to visit the door daily, and staff would bring Arnold near her so they could see each other. They even set up a temporary pen so the two love birds could share a meal together!

Once Arnold was healthy enough, he was returned to the wild. Amelia was right there waiting for him, and they took off together for a swim in the pond.

“We are not sure what they will do next, but we are so happy that they have the opportunity to do it together,” the center wrote on Facebook. “Arnold’s foot has healed well and today we got to see him both fly and swim. We are confident that he will have no trouble keeping up with his partner Amelia.”