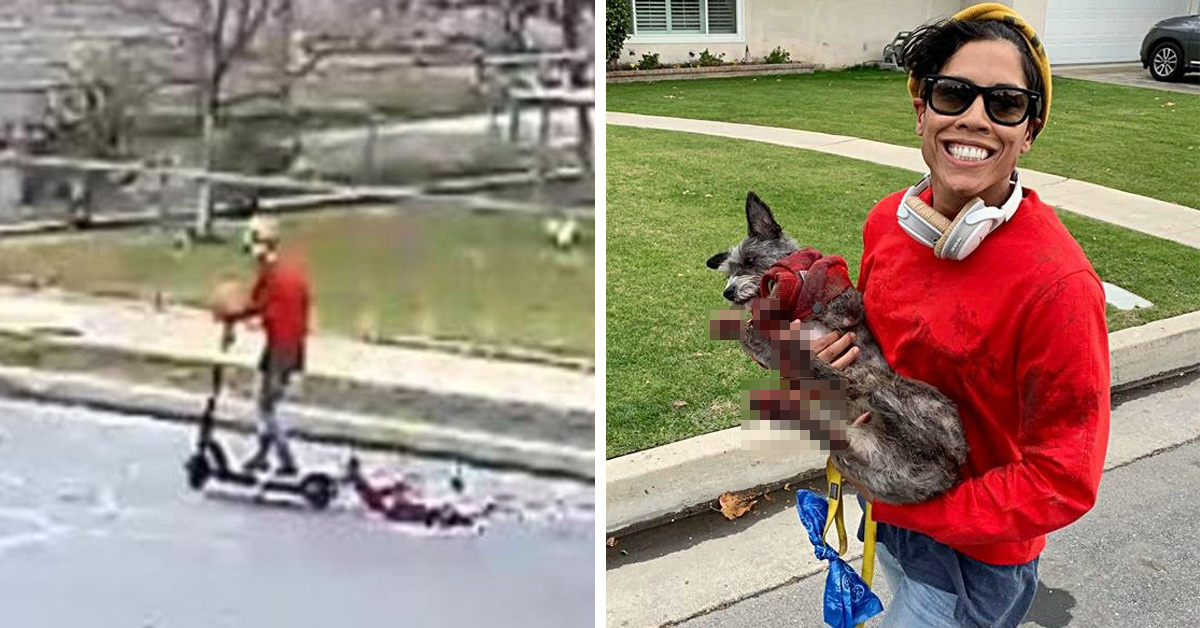 The case of a dog cruelly dragged behind an electric scooter poses an interesting question: Can we forgive someone who abuses an animal based on mental health?

Initially, Elaine Rosa faced felony charges for animal cruelty after dragging a dog behind a Bird scooter through Bakersfield, California in 2019. The dog, Zebra, suffered bloody paws and abrasions, but no permanent damage. He did need staples in his leg though.

Disturbing surveillance footage shows Zebra, dragged by his leash, trying to keep up with the scooter. At top speed, Bird scooters can travel 18 miles per hour. Eventually, the dog fell and was dragged.

It’s not clear from the footage how long Zebra was pulled, but eventually Rosa stops the scooter and picks him up. You can view the video on Facebook or below, but be warned it may be disturbing to sensitive viewers.

A witness reportedly confronted Rosa about the abuse at the time. In a since-deleted but still widely shared post, the witness wrote they saw Zebra being dragged while they were biking.“The dog was on its side and we watched it being drug at least 100 yards and there’s no telling how long she had been dragging it for before we saw her.”

The witness went on to say they followed Rosa back to her apartment while on the phone with the police.“She told me that she was going to call the cops on me for harassment and threatened me but she sure didn’t open the door and have something to say when the police went knocking on the door.”According to early police reports, the dog legally belongs to someone else. Zebra remains in that person’s possession.

As a result, the criminal case against her was suspended.  Eventually, in 2021, the case was dismissed under a number of set conditions.

Successfully completing the program meant that Rosa would not have a conviction on her record. During the October hearing, Prosecutor Andrea Kohler explained:

“This is a statutory provision that allows for some people charged with felony crimes, if they fit the criteria, to ask for that leniency. It is a motion that is made by the defense and is assessed, and usually a report is provided, as in this case it was.”

As a member of the National Guard, Rosa had to work with the veterans administration as well as a behavioral health facility. Those institutions submitted status reports and the court monitored Rosa’s progress.

As is common with animal cruelty cases, Rosa received plenty of online vitriol following the incident. KGET posted the surveillance footage online, and it was viewed 75,000 times. A petition calling for felony charges circulated, collecting more than 2,000 signatures.

A few weeks after the news covered the incident, the District Attorney’s office filed an animal cruelty charge and a misdemeanor charge of failing to provide animal care. Now, people remain furious that these charges didn’t stick.

Prosecutor Kohler said this in defense of the court’s decision:

“On the other hand, I do believe that the evidence that was presented to us, as we received, as we investigated, did show that this was an extremely negligent act, a grossly negligent act, but not something that the defendant intentionally did.”

I’m just glad Zebra is okay. Electric scooters are for humans to ride solo, not with a dog.