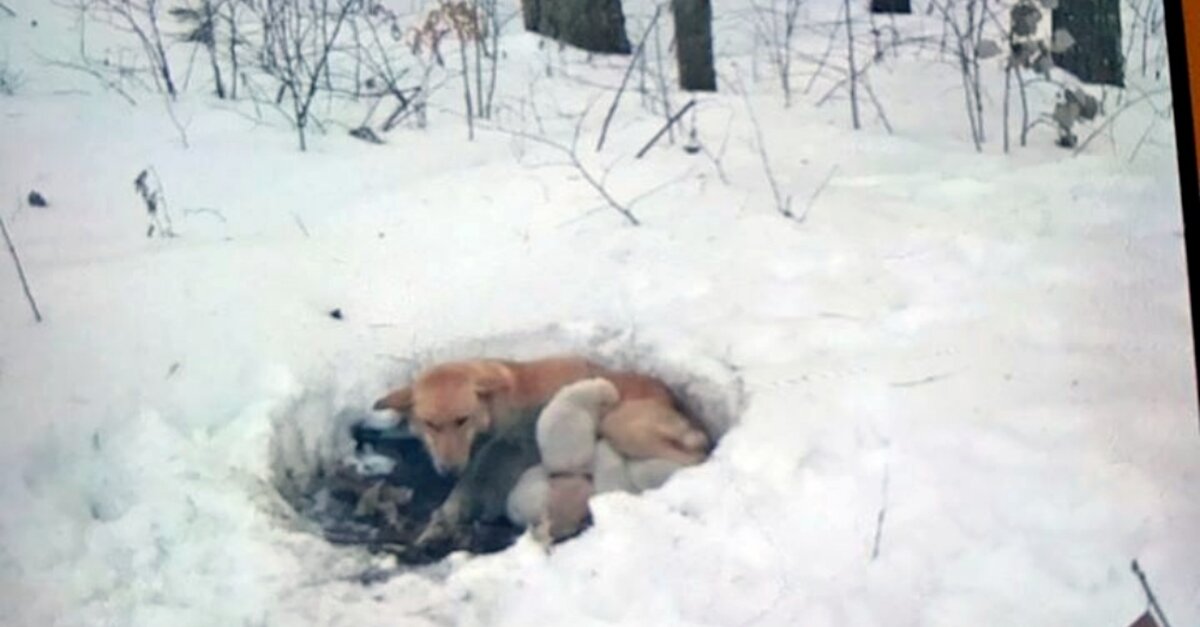 This is a mother’s love

Minnesota winters are harsh with freezing temperatures and heavy snowfall. It is no place for a stray dog, especially one with six puppies.

Mama dog was doing her best to survive and protect her puppies, but they desperately needed shelter and food. With nowhere else to go, mama dug a hole in a snowdrift and wrapped her body around her puppies.

Thankfully, a family spotted the dogs and rushed them to Red Lake Rosie’s Rescue. The dogs were rescued just in time because mama had stopped producing milk and the three-week-old puppies were starving.

Rescuers believe Snowbelle, as the rescue later named her, gave birth to her puppies in the snow. It was a miracle they survived.

“After a few days of warm shelter and good food Snowbelle started producing lots of milk for her babies,” posted the rescue. The puppies quickly grew and were put up for adoption. Four of the darling pups–-believed to be Golden Retriever/Aussie mixes–were immediately adopted into loving homes.

Snowbelle and two of her puppies, Barry and Della, waited a little bit longer in foster care, but these adorable puppies quickly found forever families, too.

Followers of the rescue praised Asha on her unconditional love for her puppies. One person wrote, “Think of how hard she must have fought to keep her pups warm and alive out there, all while trying to survive herself. What a special mama she is 💜.” Another said, “She’s a good mama. More people should be like her. So precious!”

Snowbelle made incredible progress after her weeks in foster care. Not only was the dog more outgoing, Snowbelle was now spayed, house-trained, and good with other dogs. Not to mention, a survivor with a heart of gold.

The loyal dog was finally adopted by a woman who had followed Snowbelle’s story on Facebook. “I am extremely proud to say I’m adopting Snowbelle!,” the dog’s new owner exclaimed. “Her new name Asha will be coming home as soon as her stitches are out. She’s going to be filled with love, hugs, kisses, spoiling and more food and warmth to never go hungry or cold ever again!”

A year later, rescuers also received an update from someone who’d adopted one of the “snowdrift puppies,” as they’d come to be known.

“It’s been a year since this post and I still can’t thank you guys enough for rescuing them and the kind-hearted people that brought them in,” this person wrote. She also included a photo of her puppy, who’s since grown into a beautiful dog. The rescued dog even has the same white mark on her head that she had as a puppy.

“This is my Pepper from that litter. She’s my whole heart and soul,” the puppy’s grateful owner continued. “Thank you for saving these guys, I can’t imagine my life without her. ”

Congratulations to Asha, Pepper, and their new families! We’re glad this harrowing tale includes a happy ending for everyone involved.