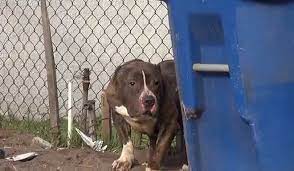 Kids had thrown rocks at him and he was hurt and alone. The stray Pit Bull now named Buddha didn’t have much of a future until someone called rescuers to come save him.

Eldad Hagar with Hope For Paws was called about a stray Pit Bull in a Los Angeles neighborhood who had been injured by kids throwing rocks at him. Eldad was told the dog “doesn’t like guys”, which made him a bit nervous but he was able to coax the dog with a cheeseburger and now the stray named Buddha is on his way to a new life.