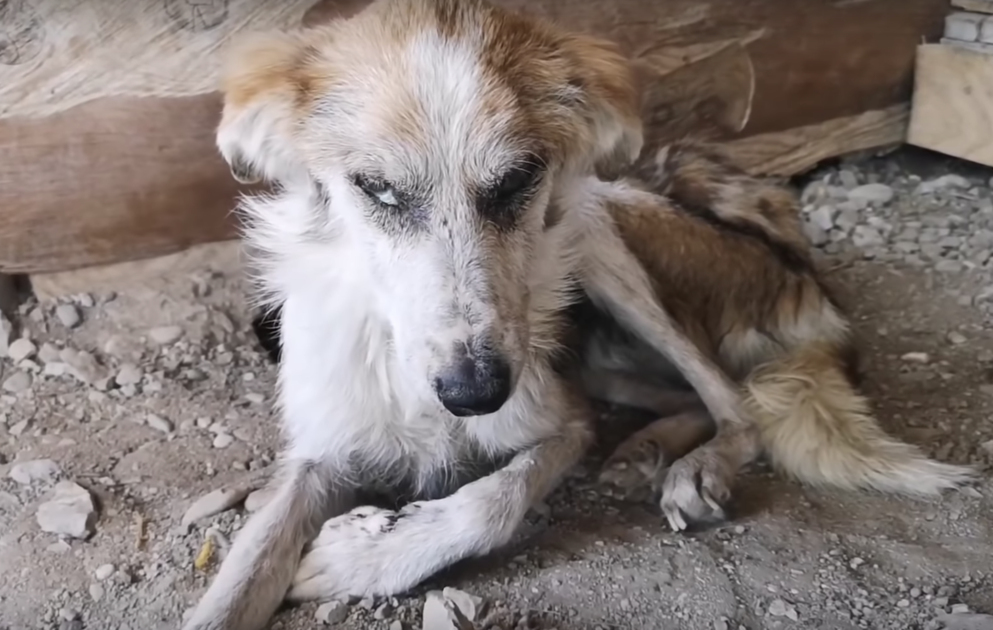 They said don’t waste time and resources on a dying dog but they didn’t listen.

A stray dog living in Greece knew he was on borrowed time. He was starving and too weak to look for food. He felt his time was up and wanted to be left alone so he could pass away in peace. He found a spot in an alley, laid down, and waited for death to come.

But instead, rescuers from DAR Animal Rescue, got to him in time! They picked up the bony dog and carried him to their vehicle. He didn’t protest. He was gentle and welcomed their kindness.

Living on the streets had certainly taken a toll on both his body and mental state. He had no one to rely on, no one to love him, no one to tell him it would be okay. The loneliness in itself is enough to want death to come.

They named the dog Marios.

The sad, skinny dog was rushed to the emergency vet. He lay on the table looking totally defeated. His eyes were badly infected and he was so malnourished that his kidneys were failing.

The vet decided it was best to admit the dog for a while. He would need IV nourishment and medication to get him stronger. Once he was stable, he was transferred to DAR’s shelter. DAR volunteers continued his medical care.

His body was shut down but his spirit began to perk up. In a few days, he was able to lift his head up. It may not seem like much but in his case, it was!

A few days after that, Marios was able to eat on his own! This was a very good sign. DAR volunteers also made sure to feed Marios’ soul. This dog didn’t just need food and shelter, he needed to feel love and kindness.

Marios continued to lay there but he improved slowly. Then one day, the rescuers went to him to give him his first meal of the day and he had moved from his blanket to the other side of his shelter. THIS WAS A HUGE DEAL! He was strong enough to get up and stand on his own and even take a few steps. What a victory!

A few days later, Marios was standing up all the time and even walking over to get a drink. The best surprise came next. As his favorite humans were walking over to say hi, he began to wag his tail. WOW. What an amazing sight to see. It warmed everyone’s hearts.

DAR shares all their rescues on their YouTube channel and social media pages. Someone saw Marios’ story and stepped forward to adopt him. The news was incredible, especially since his life had been so terrible up until now. DAR was honest with the family and explained that his kidneys were failing and he wasn’t likely to live long. The family didn’t care. They desperately wanted to give him the best days they could. Even if the days were numbered.

And that’s exactly what they did. Marios didn’t survive for very long but he did spend his remaining days ONLY feeling love. He didn’t die alone in an alley. He passed away in the loving arms of his family.

We can’t promise every rescue is going to end the way we wish it would. But maybe, just maybe, in Marios’ case, and for dogs like him, this is the perfect ending. As he closed his eyes for the final time, he knew he wasn’t alone. Watch Marios’ full story below. We are so grateful for rescue groups like DAR and for the family who took Marios in regardless of his life expectancy.

Please ‘SHARE’ to pass on this story to a frie