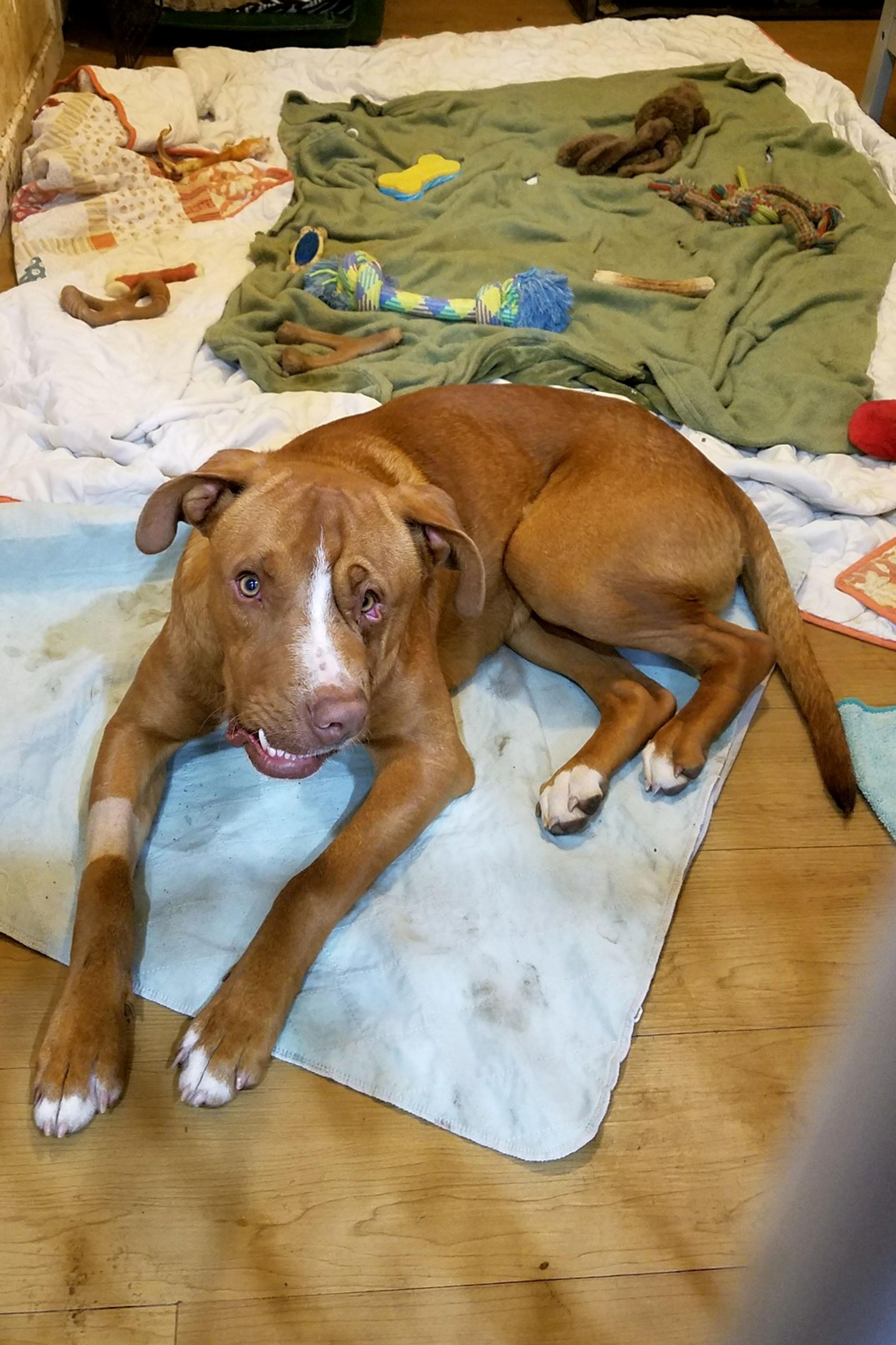 After a rough start in life, Woody was looking for a forever family…now we have heartwarming news to share.

A dog with a crooked face is looking for a forever home. Woody was mauled by another dog when he was just 5 weeks old and he was “left to heal on his own with no veterinary care”, according to S.N.A.R.R Animal Rescue Northeast.

SNARR came to Woody’s rescue after after they learned he was chained up outside and abandoned by his owners. Woody spent six weeks alone, surviving on the kindness of neighbors who fed him, until word finally reached SNARR.

Scroll to the bottom of this article for the latest update to this story.

“Woody’s ‘family’ moved out and abandoned him at the home,” SNARR writes on Facebook. “We were asked to take him into rescue and of course said YES!”

Although his face is lopsided, Woody doesn’t have any health complications. “He just looks a little different which doesn’t bother us one bit,” his rescuers say. “In fact, it’s what made us fall in love with him even more.”

It wasn’t only his looks that his rescuers fell in love with. They soon learned the Pit Bull had a big heart.

When Woody arrived at his foster home, his foster mom didn’t feel so great.

“The first day we had Woody I was sick with a fever,” foster mom Jamie Bond told The Dodo. “He knew something wasn’t right and never left my side. He snuggled with me on the couch all afternoon. Now he’s my shadow, always following wherever I go, making sure I’m safe and sound. Woody loves to curl up on the bed and put his head on my chest.”

Now 8 months old, Woody is also making up for his missed “puppy” time and is very playful and affectionate.

SNARR plans on being very selective with whomever adopts him because they want to find the best fit for him and his new family. They write, “Woody, while adorable, needs some love and a bit of training, he is a bit jumpy, but who wouldn’t be after being chained up outside! He also needs a home without cats, he likes to chase them.”

They also believe he will thrive best in a home with female dogs only. “He is currently in foster with 4 other female dogs and does wonderfully,” says SNARR. “While Woody is good around kids, we think older kids (over the age of 10) is best, he has zero aggression towards anything or anyone, but he is a large dog who can at times get excited and jump up, so older kids are the better fit.”

Anyone interested in adopting Woody (and who fits the criteria) can fill out an application at SNARR Northeast’s website.

We have a heartwarming update to share on Woody. After several months of searching for the perfect forever home, SNAAR happily announced Woody has found a home, just in time for Christmas.

They shared a picture of him in a Christmas sweater in his new home, eagerly awaiting all the gifts and love he will be receiving this year, thanks to his new family.