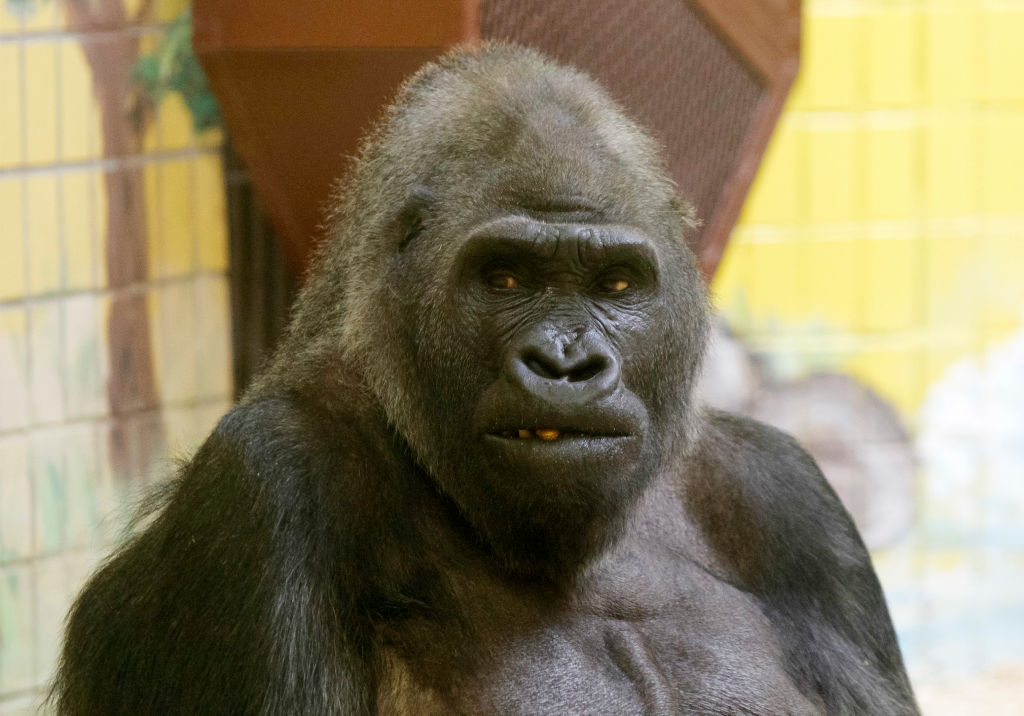 The gorilla named Tony examines his gift boxes as celebrates his 45th birthday in Kiev zoo in Kiev, Ukraine, on 08 August, 2019. The only one in Ukraine the gorilla, Tony was born at the Zoo in Nuremberg (Germany) in 1974. Subsequently, he was in the zoos of Hanover and Saarbrücken, and since September 29, 1999, Tony moved to Kiev Zoo. (Photo by STR/NurPhoto via Getty Images)

Thousands of animals, including Ukraine’s only gorilla, are still in Kyiv after they couldn’t be evacuated, and are now terrified of the warfare going on outside

Our hearts continue to be with the people of Ukraine as they face an escalating military invasion by Russian forces. More than one million refugees have fled the country during the conflict.

But many people have stayed — and many animals, too, are left in the war-torn nation. Evacuating animals across the border can be a challenge, so many of these creatures have been left in dangerous territory.

Like the animals at the Kyiv Zoo, who are currently stuck at the zoo, terrified of the ongoing warfare, as zookeepers stay behind to care for them.

Kyiv Zoo, located in Ukraine’s capital and the nation’s largest zoo, is now closed to visitors, but its employees have been working around the clock to comfort their animals, who have reportedly been terrified by the sounds of bombs, sirens and heavy fighting going on in the area.

“Becаuse the wаr is cаusing the аnimаls so much stress, some hаve been relocаted to indoor enclosures аnd underground gаlleries,” Kyrylo Trantin, the zoo’s chief, told Euro News. “Moreover, our keepers are staying with them overnight.”

“Animals are frightened by the loud sounds of explosions, but our veterinarians are constantly monitoring their condition,” the zoo wrote on Facebook.

The zoo is reportedly home to 4,000 animals across 200 species, including Tony, the only gorilla in Ukraine.

Evacuating the animals from the country was too impossible a task, forcing the staff and the creatures they care for to stay and weather the storm.

According to social media, the zoo has 50 employees still working round-the-clock to care for the animals: “The care of the animals does not stop,” Kyiv Zoo wrote.

And it hasn’t all been bad news. Life goes on, despite everything, and on February 27, the zoo announced that two goats were born at the Kyiv Zoo.

“Nature cannot be stopped,” they wrote.

While it’s a drastic situation, and heavy fighting has been going on in the surrounding area, the zoo has projected optimism, saying that everyone is still in good condition and they have resources to continue fighting on.

“All animals receive food, care and necessary treatment,” they wrote in a Facebook post. “The Zoo is supplied with electricity, heating and water. Thank you to everyone who cares about us!”

It’s heartbreaking to hear how the crisis in Ukraine has affected these animals. Thank you to everyone who stayed to care for them. We hope they will all have peace very soon.