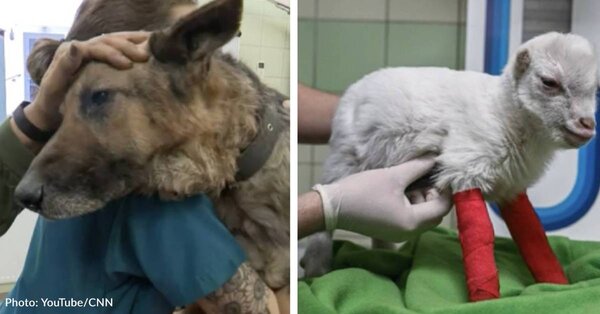 Sasha and Moon are just two of hundreds of animals recovering from Ukraine’s war in a Polish shelter just across the border.

Men, women, and children aren’t the only victims of war.

Countless animals are also affected by the growing crisis in Ukraine, where they risk shelling, bombs, and starvation with each passing day of the war.

This heartbreaking plight has inspired brave shelter workers to risk their lives saving Ukrainian animals affected by the fighting.

According to CNN, Ukraine’s crisis has even inspired shelter workers from nearby Poland to cross over the border to rescue animals from the war.

This includes dogs like Moon, an elderly German Shephard rescued by shelter staff from the ADA Foundation, a no-kill shelter in Poland caring for hundreds of animals rescued from nearby Ukraine.

“She is in bad shape,” shelter veterinarian Jacob Kotowicz told CNN. In addition to being extremely dehydrated, dirty, and scared, the Ukrainian dog has a massive tumor requiring surgical removal. “I hate to see them suffering like this,” the Polish veterinarian said.

But Moon isn’t the Polish shelter’s only war refugee. The foundation is also working around the clock to save a newborn goat named Sasha, who also arrived at the shelter in urgent need of medical care.

“A lady from Ukraine brought him with her. She wanted to save him,” another veterinarian told CNN. “He would have starved to death if he was left in Ukraine with no milk.”

But while Sasha’s owner couldn’t provide the newborn goat with the care he needed, she also clarified that she would be back for her beloved pet as soon as possible.

“This lady [said], ‘I love so much this animal and this animal is part of the family,” another shelter vet recalled Sasha’s owner saying. “We want him back when war will end.’”

Find out more in the video: