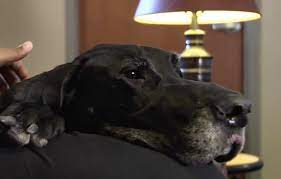 This woman’s boyfriend put her through a wall and came at her with a hammer. But then her dog walked in…

Seven out of every 10 women in the United States say they are unable to escape abusive relationships in part because the abuser threatens to harm the family pet. Two out of five women say they don’t leave because they worry about what will happen to their dog. That’s why this story of a heroic dog is not only special for the life he saved, but also for the lasting legacy his heroism has had in the community.

A Great Dane named Hank (earlier referred to as J. Matthew in media coverage to protect his identity) saved his owner’s life when she was violently attacked by her boyfriend. The man was beating her with a hammer and even pushed her straight through a wall. When Hank realized what was happening he leaped in front of the man to protect her.

“When my Great Dane, J. Matthew [Hank], heard me scream, he laid on top of me, said the victim, who wishes to remain anonymous. “I tried to get him out of the way, but he received the first of many blows from my abuser.”

After badly beating him, the man threw Hank from a second-story window. Hank’s injuries were severe and included a broken hip and ribs and other broken bones.

“I ran to him but was told if I touched him, he would shoot him. I didn’t know whether to believe him or not and I didn’t want to push it,” the woman says of her attacker, who at this point had pulled out a gun.

She jumped in her car and fled to police who returned to the home to arrest her abuser and rescue Hank. Police put her in touch with the Rose Brooks Center in Kansas City, an emergency shelter for women and children. But when she showed up with her 110-pound dog the shelter, they had to make a decision. Turn her away, because the shelter did not accept animals at the time, or make an exception.

As the woman refused to abandon her guardian angel, and knowing her life was in danger, the center agreed to let them both stay. Hank became the first pet under the center’s roof. “I’m so glad we did,” said Rose Brooks Center CEO Susan Miller at the time. “It was just inspiring to see how she was able to heal better with her pet here.”

The giant Dane made a strong impression at Rose Brooks Center. He was the first animal to live there, but he has not been the last. That’s because he inspired the center to built a pet-friendly wing to help other families like his.

The Center realized that by accepting pets, they would get rid of a serious barrier many individuals face when attempting to escape an abusive relationship. They also learned that children (and adults) do better when the pets remain with them. The center has housed over 36 dogs since opening a few years ago.

As for Hank, he went on to be awarded the Valor Dog of the Year and People’s Hero award at the Fifth Annual Dogs of Valor Awards. His heroism not only had a lasting impact on the life of his mom, he had a positive impact on the community-at-large for years to come!

Watch the video below that features Hank’s mom (remaining anonymous) telling her story and how he and the Rose Brooks Center saved her life.

I really hope other shelters consider doing the same thing that the Rose brooks Center has done. I’m certain it will save lives!

Share Hank’s amazing story of heroism with your family and friends!