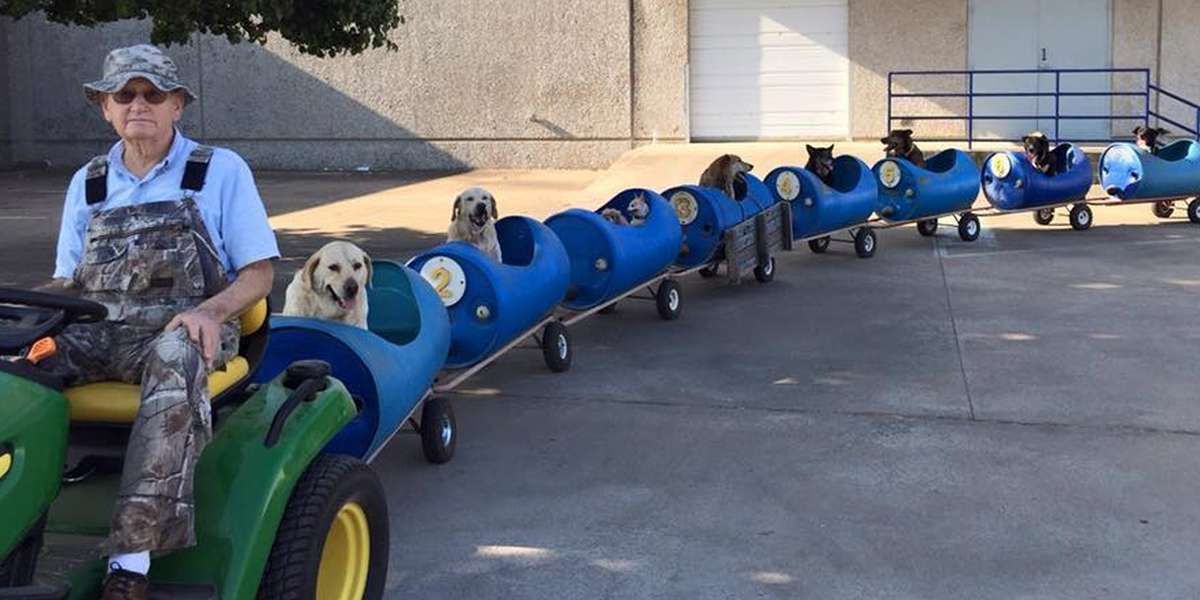 He rescues dogs no one else wants and takes them all out for adventures, every single day.

If you are in Fort Worth, Texas, you might get a glimpse of an unusual train puttering down a road. You might have to do a double take, as you realize it’s a train filled with dogs!

Eighty-year-old Eugene Bostick and his “dog train” are well known to locals. He’s been driving the tractor with eight barrels in tow for several years.

It turns out the retiree built the train for the stray dogs he’s rescued with his brother over the years, after people have dumped the dogs near their property.

“I started out with my tractor. I had a little trailer and I put four or five dogs in there and took them riding. Then more dogs started to show up and I said, ‘Uh-oh! That’s not enough room!’ That’s when I came up with that,” Bostick told NBCDFW explaining how the dog train came into being.

Recently, Tiffany Johnson, who has seen him regularly go by her office, wanted to take a picture. “This is the coolest guy he rescues stray dogs and every morning he takes them for a train ride by our building, I finally got the courage up to ask if I could take his pic! Love this and had to share!” she wrote on Facebook after sharing the photo.

Tiffany told one commenter that the dogs don’t ever jump out. It seems they know exactly what to do and bark enthusiastically on their ride! When Tiffany was asked where Bostick finds the strays, she said, “he just rescues them from going to the pound!! He said people actually drop their dogs they no longer can take care of, off to him”.

It appears Bostick has been taking his rescue pack on train rides for a while now! He sometimes ends up at the Sycamore Golf Course out back of his property, where golfers watch and smile.

What a wonderful, kind man! The pups sure look like they love it!

Share this sweet story with your family and friends!