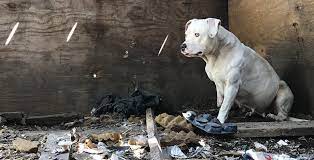 After her owner was murdered 5 years ago, Treya was living a nightmare until one man spotted her on his way to work…but wait until you see why she’s wagging her tail now.

Treya’s story haunts the rescuers at Stray Rescue of St. Louis. When they got a call that a dog had been left behind after her owner was murdered 5 years ago, they didn’t yet know the terrible torment she had endured since then.

Treya had been chained up and lay under a deck all alone, with only the kindness of neighbors to rely on to get her through the harsh winters. They supplied hay to keep her warm and enough food to keep her alive.

What they couldn’t do is free her from her chains. When one of her chains became tightly wound around her paw, Treya chewed through her foot in desperation.

Although Stray Rescue doesn’t go into details of who “owned” Treya in the time since her owner died, they said one of their seasoned rescuers named Donna, responded to the call. They wrote, “Rescuing her wasn’t easy. She feared humans from lack of socialization being isolated in her own private agonizing world.”

Dena Kehm Pedrotti revealed on the rescue’s Facebook page that it was her boyfriend, a firefighter, who found Treya on his way to work and “went back for her”. “He said this will be her last day living like this,” she wrote. “He called Stray Rescue and he said Donna was there so fast! He said her compassion towards the dog was amazing!”

Treya was brought back to Stray Rescue’s shelter where they immediately began to tend to her health.

“Once back at our trauma center, besides the obvious missing foot, we discovered she also has heartworm and a wicked case of a flea infestation,” the rescue wrote. “Her emotional wounds matched in intensity of her physical ones.”

Treya needed a lot of mending, and her rescuers thought that introducing her to a friend might help. So she was introduced to Little Pinky – another stray the group has saved.

Treya’s tail sprung to life the minute she met Little Pinky. Watch the heartwarming moment when she realizes she has made a new friend in the video below.

“Her nightmare is over and her new life is just beginning,” Stray Rescue said. Treya is now in a foster home with wonderful people who can take care of her medical needs.

“We can attest to her fortitude and perseverance. She is extremely happy living with us and our dog Stella,” Joseph Schnell, who is fostering Treya with his partner, wrote on Facebook. “We can’t wait to see what her future holds with a new family who will love her as much she deserves. Very strong dog and very optimistic thanks in a huge part to the work done by Stray Rescue.”

After her heartworm treatment, Treya’s rescuers plan on looking into a prosthetic for her. To help Stray Rescue with Treya’s care, visit their website.