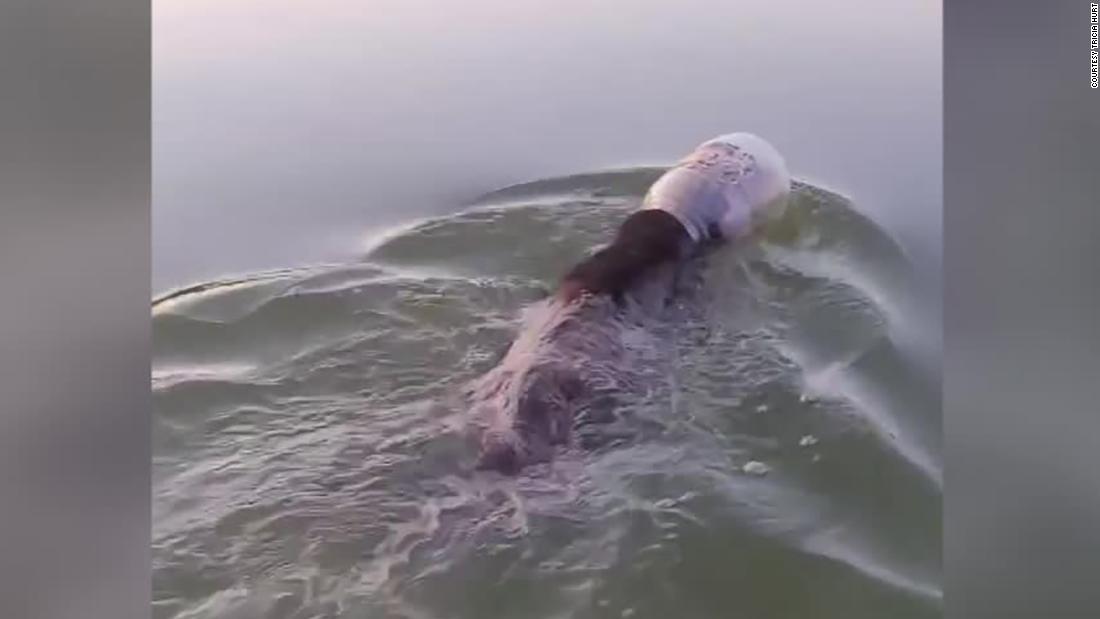 They could see the panic in the bear cub’s eyes as the plastic container filled with water. Watch as this family races to save him.

A family of boaters saved a young bear they spotted swimming with a large plastic jar stuck on his head.

Tricia Hurt and her family were fishing on Marsh-Miller Lake in Wisconsin when they spotted the bear with the bin over his head. The bear had been spotted on land by locals for several days in a row, but now the bear was swimming in the middle of the lake and struggling to survive.

Not only was the bear was in danger of drowning as the container was slowly filling with water, but it was struggling to breathe.

Tricia instructed her son, Brady, to steer the boat close to the animal while her husband, Brian, attempted to pull the bin off the bear’s head.

Brian told KARE 11 that he could hear the bear struggling to breathe. He wasn’t able to pull the jar off in their first attempt because the plastic was too slippery.

They tried again as the exhausted and frightened bear swam away from their boat. Tricia directed Brady to get in front of the bear but makes sure to voice her concern that the bear not end up in the boat!

After several attempts, Brian successfully pulls the plastic container off of the bear’s head much to everyone’s relief. Tricia happily tells the bear to, “Swim happy.”

The family later recounted the adventure when interviewed in the news video below.

Brian said the bear immediately could breathe more easily when the bin was removed. And Tricia shared  on Facebook that she “Never dreamt we would ever do this in our life time,” and added, “He made it to shore after all that.”

The container stuck on the bear’s head was a large bulk Cheesies container and illustrates just how deadly plastic garbage can be for wild animals. For the safety of all animals please make sure to dispose of your garbage properly.