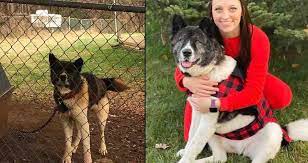 After seeing the Akita outside day and night, chained to a tree and without food or water, Laura decided to act.

Laura Seymour first saw Takia a year ago. The Akita dog was chained up to a doghouse at a neighbor’s home. She immediately observed that the dog did not have food or water in her bowl. Despite the dog’s size and the fact they were strangers, Seymour decided to introduce herself. She was surprised that the dog was very friendly and well-behaved. She began a regular routine, visiting Takia three times a week to give her food and water.

As their friendship grew, so did Seymour’s concern. Takia was left outside day and night, in the pouring rain, bitter cold and scorching summers in Virginia. She grew so fond of Takia she thought of stealing her to save the chained dog from her misery. But Seymour knew that wasn’t the route to take. So she called animal control, but the officers called her back to tell her that as long as Takia had food, water and shelter, she wasn’t necessarily being neglected.

Nevertheless, Seymour continued to visit Takia for a full year to ensure Takia was taken care of. Then, in the summer, concerned for Takia’s welfare in the hot weather, Seymour brought her mother over to introduce her to Takia. Seymour’s mother encouraged her to call animal control again.

The next day, Seymour heard the news she had been longing to hear. Takia’s owner had surrendered her. They asked Seymour if she knew someone willing to adopt Takia, and of course, Seymour immediately volunteered.

Another neighbor commented on the video and was thankful for Seymour’s care and persistence.

“I am so glad [Seymour] got her!” wrote the neighbor on YouTube. “I live next door and we also fed her and called animal control and they would tell us the same thing about the house. My husband would bring her food and water and my sister-in-law across the street would too. So animal control must have thought the owner was, but they never did.”

These days, Takia no longer sleeps in the mud but on a comfy dog bed. She’s free to roam and play and be a dog. And of course, she gets a lot of love.

“There’s just something about her, I got super lucky, I really did,” Seymour told The Dodo Soulmates in the video below. “It’s like, 100 per cent she is so appreciative of everything.”