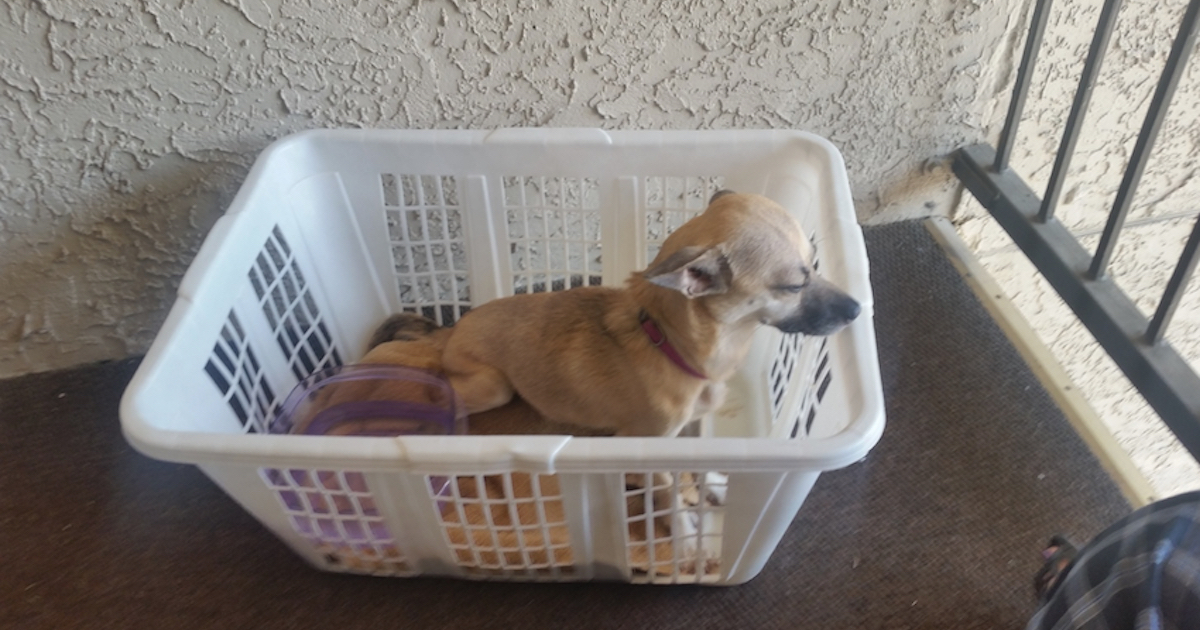 I can tell that she’s exhausted.

Imgur user OhHiDenny took to the platform to share the story of an emaciated stray he and his girlfriend found one morning. It’s a rollercoaster ride of a story, but it’s worth sticking around for the end! In his own words below:

“My girlfriend and I went out on the balcony Sunday morning before heading out for the day. Wouldn’t be back till late that night since we had a day of errands planned. I look down from the railing to see a dog. All by herself laying in the grass. I glance around to see if there’s an owner nearby. Probably just taking her out for a walk, she got tired and decided to lay down. There’s no one around. I can tell that she’s exhausted. She glances up at me and I immediately know that we have to go down and check on her.”

“We grab some turkey and water then head down to check on her. It wasn’t until we got up close that we noticed she was absolutely covered in fleas and terribly emaciated. She had a collar but no tags. She ate a little bit of the turkey but wouldn’t drink any water. I rushed back up to the apartment, tossed all of my clothes out of my laundry basket, and bolted back down. We scooped her up and brought her to our front door. She had no energy, no emotion, no enthusiasm. We thought about calling the local shelter, but we couldn’t take the risk of them just giving up on her the moment we dropped her off.”

“I rushed to the store and bought flea bath shampoo while my girlfriend sat with her. Splish, splash, she was taking a bath! She took it like a champ. Sure she wanted to get away from the water, but she was such a good girl. We gave her two baths with multiple scrub downs while picking off fleas and washing them down the drain. The number of fleas was unreal. Every time we thought we had them all, another would rear its ugly head.”

“The baths were complete. The sweetest face I’d ever seen came out after all the pests and dirt were gone. Good lord, I couldn’t keep it together. I think I was more or less than my girlfriend was. I went back to the store to buy dog food, a crate, and of course a little toy for her.”

“She didn’t know whether or not to trust us enough to fall asleep. She needed sleep badly, but her past definitely damaged her trust in humans.”

“Here you can see how skinny she actually is. I can’t believe someone would just abandon a dog as sweet as her. Something so innocent doesn’t deserve that. She threw up multiple times in our apartment. She would drink a little water. Throw up. Eat a little food. Throw up. I thought it might be because she hadn’t had anything for so long that her system couldn’t handle it, but we didn’t know for sure.”

“She didn’t mind her crate at all. She was so good! Although, I think she knew the word “vet” because as my girlfriend and I were talking about taking her the next day, this is the look we got. Don’t worry little girl, it’s for the best.”

“X-rays didn’t show us what we wanted to see. She had a major blockage. Hence the throwing up. Her little body was rejecting everything. The vet gave her a warm water enema while we waiting in the room. Thirty minutes pass and the doctor returns only to tell us that she didn’t pass anything and that surgery would be needed. He gives us the estimate and we nearly throw up just as our newly found pup has done. Since we didn’t know what the blockage was, the doctor couldn’t give us a chance of survival after the surgery. He said since they were going in blind, they wouldn’t know until they actually got in there. What do we do? How do we decide if it’s worth it?”

“Well, let’s be honest. There was only one choice. Let’s do it! She deserves a chance. The surgery certainly isn’t in our budget, but there was absolutely NO way we were going to tell them to just put her down. A dog as sweet as this is more than worth it. We hadn’t planned on owning a dog, especially spending thousands of dollars on just a chance to own one, but we had to try.”

“Her empty crate in the apartment weighed down our hearts, but we knew that the surgeons would take good care of her. We got a call midday today and the surgery was a success! They had to cut into her intestine in five different places to remove all of the cloth and plastic that she had eaten just trying to survive on her own. She is in recovery now and they said we might be able to have her back home on Thursday. We can’t wait to have her with us again. My girlfriend has already told me that the pup will be spoiled rotten. Little One has apparently already claimed my spot on the bed, as well. Oh well, totally worth it.”

He posted an update later saying:

“I hope this is the right place to post an update. We got a call from the surgeons about an hour ago. She had a rough night last night but has started to perk up today. Her curiosity is coming back and she’s moving around a bit. All of the nurses just love her and keep sneaking back there to get some pets :)”

We’re so glad this couple happened to notice this dog when they did and took him in to give him everything he needed. Little One surely wouldn’t have survived without their help. We wish nothing but the best for them going forward in life as Little One continues to grow and blossom.