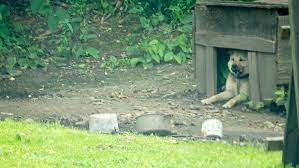 This pup spent his whole life on a chain. When he realized that he was finally free? You’ll want to have your tissues handy.

A dog who spent his whole life on a chain owes his freedom to a stranger who saw him and was determined not to give up. But it was how he reacted after he was set free that had his rescuers crying tears of joy.

What follows is the heartwarming rescue story of a woman who says she had the most amazing experience spending two months working to make this dog’s life better.

Peanut was chained up and had a dirty shack to call home. He only got noticed after his dog house became visible from the parking lot of the local bar when part of his owner’s fence fell.

People called their local humane society for help, but none came. Russelline Steinbuhler was one of them. Determined to help the dog, Russelline contacted a rescue that helps chained dogs and asked them to come.

“They said they couldn’t come that far out of their area but they would help and guide me financially and emotionally,” she wrote.

With the help of two of her local rescues – Hope for Erie Animal Wellness and Critter Camp and Cuts – Russelline was able to make Peanut’s life more comfortable.

“I stopped out regularly to check on Peanut. We worked on learning to sit when someone approaches instead of jumping all over them. He was a very quick study. He is super smart and also learned “look” and “down” in about 2 minutes,” Russelline said. “Peanut even was able to play fetch on the chain if I threw it up in the air, he would leap to catch it and pounce on it like a puppy. Peanut is 3 years old.”

And then came the fantastic news! Peanut’s life was saved because Pennsylvania just passed new tethering laws. His owner “decided to surrender when it became illegal for him to be left on the chain longer then 9 hours at a time or more then 30 min in extreme heat and cold,” Russelline wrote.

He didn’t know why Russelline was visiting so early.

He didn’t know it but he was about to go on his freedom ride!

Then something wonderful happened. Peanut realized he was finally free and the “zoomies” started. Russelline recorded the moment and shed tears of joy.

“I dreamed about letting him do this zoomie every time I stopped to see him on his chain,” she said. But as you can imagine given his health and the fact that “he is quite out of shape”, Russelline said zoomies only lasted this one run. “First things first, Peanut was put in the play yard at Critter Camp and finally got to run. He has lived on a chain since he was a few months old. This is the joy of a dog that lived on a chain 24/7 and finally gets to run.”

Next it was time for a bath with help from Critter Camp and Cuts. “I believe this was Peanut’s first bath ever,” wrote Russelline. “He did really well. It took almost 3 1/2 hours to get him clean and de-shedded. He was a really good boy.”

Soon after, he got to be inside a house at his foster home!

He’s also receiving excellent vet care. He’s been neutered and is being treated for Lyme Disease with all the right medications.

But he is bound to get healthier where he is now. Peanut is with a foster on a 20 acre farm. “He looooves being around people and is bonding super fast,” she wrote.

Hope for Erie Animal Wellness also said Peanut is loving life inside and is “taking to it seamlessly.” “He is doing very well in his crate and loves all his toys and attention,” they wrote.

He met some new friends too, and is super friendly with other dogs.

What an amazing rescue story! Russelline and Hope for Erie Animal Wellness and Critter Camp and Cuts deserve so much praise for all their efforts and determination in transforming Peanut’s life!

Peanut has made so much progress with his foster family since his rescue and is ready for a forever home.

He’s been looking for a family for a few months now. His foster mom loves him so much she’s set up a web site about him to help him find a home. She shares that he’s picked up how to live indoors in no time. Peanut is doing amazing in his crate, doing potty and loves to meet new dogs and people. He’s so smart that he learned most of his obedience commands in just one week.

He would really do great with another dog companion and loves children. As he’s boisterous and full of energy older kids would probably be better.

Peanut (now Loki) found a forever home in March of 2018! He has a home and family who are making sure he is well looked after and gets lots of love.