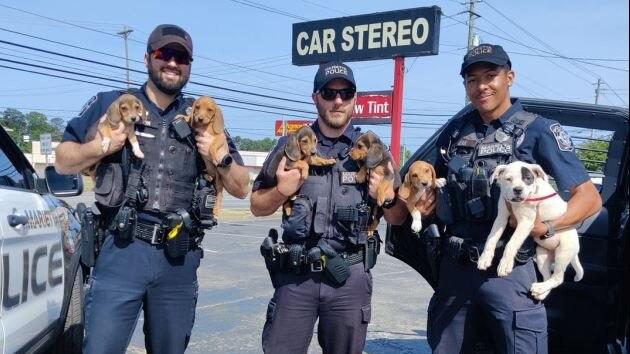 After the puppies broke loose and wandered onto the highway, a group of officers dubbed the “PAW Patrol” rounded them up and got them to safety

Normally when you read a story about police officers chasing down escaped runaways, it doesn’t sound very cute. But one police department’s story of officers who had to round up six puppies after a “prison break” is warming hearts online.

According to a Facebook post from the Marietta, Georgia Police Department, six puppies escaped from a fenced up area, and ran to the highway before their owners realized.

Luckily, police officers soon arrived on the scene to chase down the runaway pups and get them to safety.

The department punningly dubbed the officers the “PAW Patrol” with “PAW” standing for “Puppies Aimlessly Wandering.”

The team was led by Officer Covino, who the MPD called the “senior puppy whisperer.”

Thankfully, all six “escapees” were found safe and sound, according to the post, and were reunited with their humans.

“You can’t make this stuff up,” they wrote.

While it was a funny and heartwarming case, the department also urged dog owners to make sure their fences are “escape resistant,” and to give their pets collars with ID tags in case they go missing.

The story went viral online, with other police departments asking to start their own “PAW Patrol” and many people praising the officers’ actions.

“I don’t know who’s cuter the paw patrol or the puppies!” one woman wrote on Facebook. “Thank you for all you do!”

Thank you to these officers for rounding up these six puppies and getting them to safety! Share this sweet story!