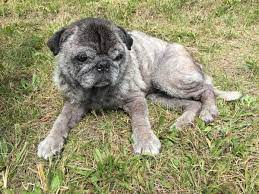 They threw him out like trash just for being old.

A 12-year-old girl is a hero to a elderly pug who was tied up in a plastic bag and thrown out of a car to die by the side of the road.

Malory Steiner was mowing the lawn at home in Royalton, New York when she witnessed a garbage bag get tossed from a dark-colored SUV. When she saw the bag get up and move she called her mom for help.

Inside the bag was a Pug covered in flies and gnats. Malory’s mother said that the smell was just “unbearable”.

They took the dog to animal control in Niagara County and Buffalo Pug & Small Breed Rescue, Inc. saved him.

The pug, now named Teddy, is missing some teeth, has cataracts a skin infection and a few other health concerns that vets are running tests for. The rescue wrote on Facebook, “He’s is emaciated and has obviously been neglected for some time” but he’s now in foster care.

Since arriving at the rescue he’s been getting plenty of rest, eating lots of healthy, good food, and his coat is healing well. He’s also received an outpouring of donations and support from dog lovers.

Buffalo Pug & Small Breed Rescue writes, “He has gained almost 3 pounds in a week. He loves his blankets and we think he looks adorable in his new collars, harnesses and leash.”

“Don’t think he has ever been walked before as he’s not quite sure what to do but we are working on it.”

“Even though we know Teddy has a ways to go in the healing process we couldn’t be happier with his progress so far.”

Thanks to Malory and her family, Teddy will get to live out his golden years surrounded in comfort and love.

Share this heartwarming rescue story with your friends and family!